Märket’s crew changed today. Jukka and Seppo arrived at 10:30. Nina and Maija arrived at 15:00, and guided 22 adultas and four kids arounds the island. During the afternoon the wind increased up to 9m/s. The former lighthouse keepers Annukka and Johan left the islands. Sincere thanks to them. Now we are preparing to our job for Märket.

Our first day on Märket was sunny, windy and busy. After the maritime breakfast, Maija and Nina went swimming, water temperature was 12 C. Seppo and Jukka fixed and cleaned the grill. Now it works brilliantly. It was literally blocked.

After that the men cut the old roof of the boat shed into smaller pieces. So the waste of metal sheets can easily be carried away. Nina painted the old toilet roof while Jukka constructed a sawbuck and painted it green. Jukka chose this colour because there is not much green on the islet. Unfortunately the sawbuck will not be ready during this week because the hardware salesman gave us nuts of wrong size.

Maija and the boys made pieces of firewood. Nina fixed the dining table with Jukka.

How many of you out there in the world have been eating Sunday lunch outside on sunny Märket? Some people have…

The week started with sunny weather, but windier than yesterday. The conditions were ideal for working outdoors. Front yard of the lighthouse was cleaned . The task of making the firewood was fullfilled. During the day the power of the wind increased, waves rolling over the cliffs. Because of that no visitors has been seen.

While working we observed two big flocks of eiders and other seabirds, on the cliffs east of the Lighthouse. The third prop was set up on the walking bridge from Lighthouse to Genegator room. The prototype of the ventilation shutters for the basement was made.

By the way, in the morning when hicking round the island and admiring huge waves we found the skin of a snake, wich itself we did not see at all. Obviously the snake had changed his or her overcoat.

Tomorrow is a very special day!

Greetings from the fab four of Märket

At breakfast 7.30 AM we had a call from the Finnish passanger ship Kristina Brahe: "We will be there in half an hour, said the captain in the telephone." Indeed at 8 AM the ship arrived and stopped near the southern bayou. 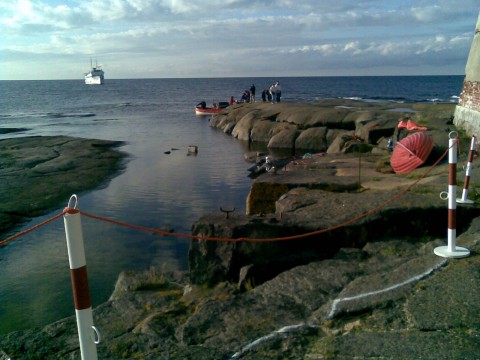 The shop was moved out to the yard as well as chairs and tables for the visitors. The tourists invaded the island from the southern side with the ship´s own lifeboats, around 10-15 at one time. The dream of many had now came true!

It was the first ever Great Lighthouse Tour that the Finnish Kristina Cruises arranged from Helsinki via Utö and Lågskär to Märket and Sälskär and back to Helsinki - of course with the assistance of the Finnish Lighthouse Society. 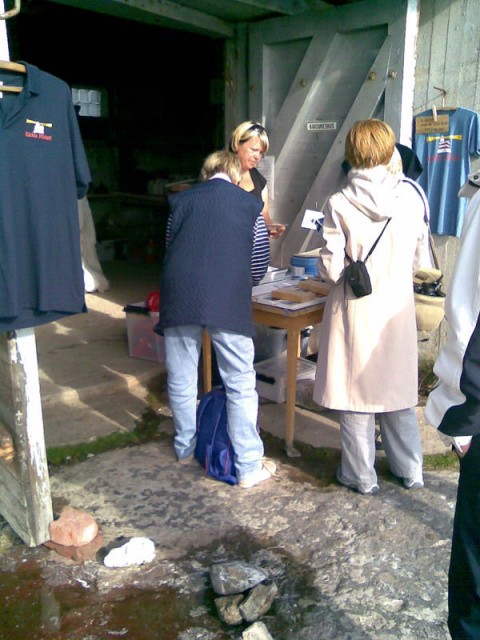 If all visitors would buy souvenirs like these passangers did the restauration would be much easier - thank You very much people!

It was avery busy day in the shop. Many cards were mailed and T-shirts were sold. Visitors were especially inspired of the remote situation of Märket. Many of them asked what we volyntary lighthouse keepers do here and how you can get to that job. Maybe it will be a rush of voluntaries next summer!

It made us feel good that the tourists didin´t only visit the lighthouse bilding. They walked all over the environment enjoying the sunny day and listening the sound of waves. One brave lady even took a swim in our green lagoon.

The amount of visitors including crue members was aprox. 84. Everybody including us, lighthouse keepers, were very satisfied of the visit, although the day was very hectic. The income we got in our souvenir shop was more than half of the rest of the summer´s income. These people really wanted to support our work here! 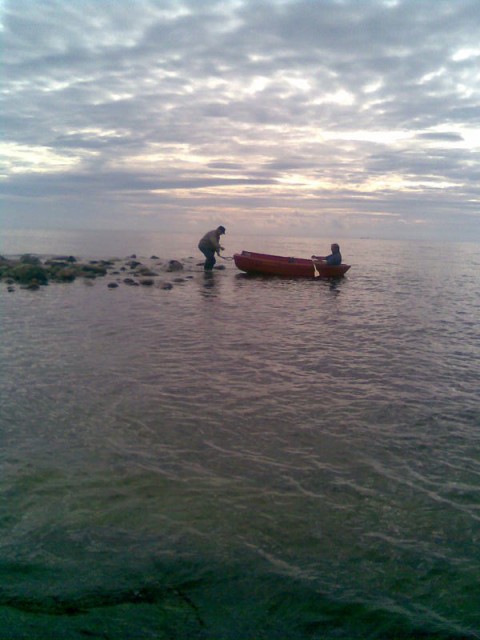 Tomorrow we will eat fish for luch! Seppo and Jukka laid a net into sea with the little, red, swinging dinghy. Luckily here is the new rubber boat for use now also!

The daily reports take supraisingly much time. Hell of a lot devices! Today Nina got enough of slow connections (she had many photos to send with the thin mobile phone connection). Fortunately we got help from a fisherman´s friend!

Many thanks for todays visitors, it was nice to see you, wellcome again ...

Märket over and out...

The fab four of Märket

It was raining last night. Morning was cloudy and wind has turned to south-west. During the day sun came out and wind stopped almost completely. What a wonderful weather!

After yesterdays "invasion" the island was very quiet. Altough at times machines were running. Men cut the old boatsheds roof, again. They made big sheet metal pieces into smaller ones. They also grinded metal rails in the ceiling in first floor to remove rust. A hard and very dusty job.

At night we saw a big bird with long neck and long legs. It was gray and its chest was white. The bird was walking in water in the old harbour. Our guess is its a haikara/häger. This morning the bird was still on the island. What is it waiting or where is it going?

Yesterday men laid fish net in the sea. Today when wind calmed down, they rowed to lift the nets up. We were really suprised of the enormous catch! Wow! And with only one net! Fourtheen whitefish, one cod, one trout and a little flunder. We released the flunder to crow bigger. The boys are experienced fishermen. They knew how to handle fishes. And soon we loaded the freezer with cleaned fishes. Now we surely know what we will eat rest of the days. Perhaps already tonight!

It is nice to be a fisherman´s friend!

The fab "fish" four of Märket

Yesterday evening we ate grilled whitefish. Very delicious! After that everybody slept tight. The weather forecast let us know that there is storm coming.

Ventilation windows got ready. Indoors the restauration work was going on. The metal rails in the ceiling were grinded and painted.

The visitor from USA did not appear. She had sent a message in June: She would came on the 28th of August. That was today.

The power of wind was increasing all the day. Now in the evening it is about 17m/s from the North. The roaring of the sea is like festive music, like a sinfony. Let`s go out!

The famous four of Märket again!

The day started stormy. Velocity of the wind was approx 19 m/s, and the sea is still roaring. So it was not appropriate to do anything useful outdoors. 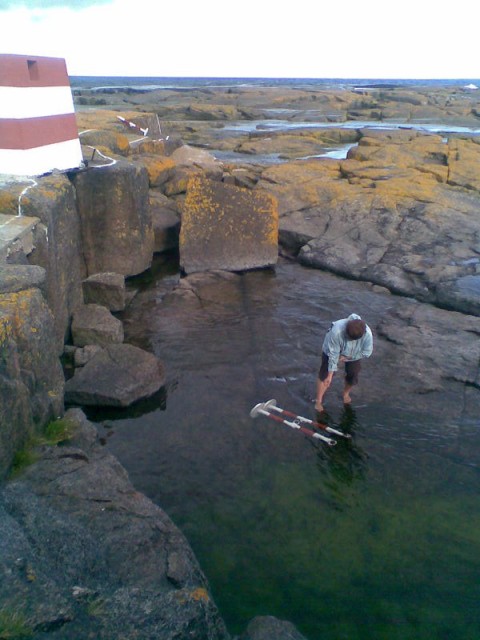 That´s why we decided to put in order the magazine. Unused timber was assorted and lifted up on the rafters of the building. Making the ventilation windows continued.

Besides, we were out already at six oclock in the morning, watching the masses of the water rolling over the island. It achieved sort of waterfalls in the clefts of the rocks.

Our old friend the Harmaahaikara/Häger passed by the lighthouse probably migrating to south of Sweden. To tell more of birds we found a dead little bird, maybe exhausted of her migrating flight, so sad, so sad.

The shop was open and there were customers inspite of the storm. We wanted to buy souveniers for ourselves of this lighthouse, which during this week has become very familiar to us.

Greetings from the fab four of Märket

This is our last day here. Wind has calmed down and the sun is shining. There was a bright rainbow over the whole island in the morning. The new lighthousekeepers will arrive today and we have to leave this unique place. Its going to be a shock to go back to the normal life. Maija and Nina know it, because they have gone it through last year.

We are going to miss the morning swims and drying ourselves on the warm rocks in the refreshing seawind. As well as bringing the water from the sea, heating it in the water kettle and washing the dishes outside on the yard. How can we get along without the music of the sea?

News, except the weather report, are for someone else, somewhere else. Only things that happened here on this small island seems to be valuable for us.

Thanks for this experience and the opportunity to do our part of this valuable job. We will see again, Märket!